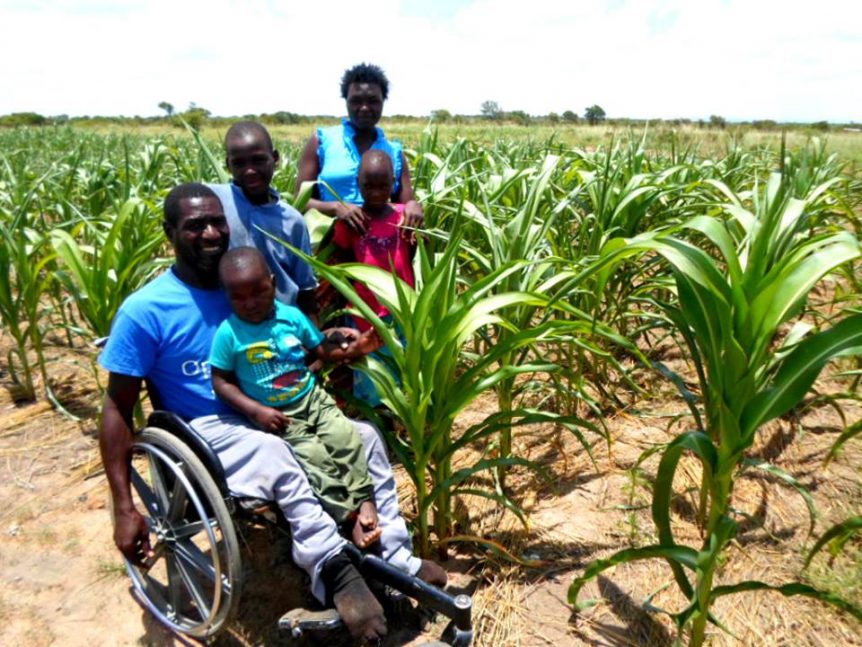 Traveling in the scorching heat towards Chivhu last week, Duncan and Mike passed plot after plot of miserably dry and shrivelled maize. The crops were visible from the roadside and provided a depressing picture as Zimbabwe grapples with the deepening drought. Chivhu had not seen rain in over a month, leaving the maize to the mercy of a relentless, baking sun, without a drop of water. The two were on their way to visit the Tazvita community and as they arrived to where this little band of disabled folk are faithfully implementing God’s farming methods, they were met with excited faces … and … plots of green maize!

It was a happy reunion. The Tazvita people have become very dear to the heart of FfF, especially Duncan who has faithfully walked with them since June last year. As is customary in Africa, the warm welcome was followed firstly with news about families and life, before the conversation turned to the business of farming. Everyone was eager for Duncan to see their plots, and so he began the huge task of inspecting fifty-three in all, thirty of which belonged to those who attended the two week course at Clouds End. The other twenty three are from those who drank in the teaching he gave during last year. Visiting every plot was quite an assignment, and took almost two days to complete! It involved a lot of walking in the heat of the day, but Duncan is a man with a servant-heart, whose eyes light up as he describes the rewarding response. Stopping at each one so that none felt left out, he described being met with beaming smiles as owners listened carefully to every word of advice and encouragement, eager to improve and learn.

The plots were all looking good, some of them actually outstanding. The methods taught had been diligently applied, and the plants survived the lack of rain, unlike those on the roadside. Maxwell (who heads up the community together with Joseph) is really leading by example and looks set to have an excellent crop, which he has worked on together with the help of his wife.

Duncan reported how some plots, just a step away from those planted using FfF methods, had been farmed in the traditional way. The difference was clearly evident. This is so often the case when teaching God’s methods – the visual results say it all. These people, are now keen, and determined to be the first to implement the new methods next season.

Domatter, who suffers from a disease called congenital lipodystrophy, resulting in excessively swollen limbs, has really struggled. Mulch is precious in that area and many of the community had to look far and wide, especially after a fire which tore through the land, burning what little there was. For Domatter, finding mulch has been difficult, she walks slowly and every step requires effort. But true to her positive nature, she has done her best with everything else, and managed keep her plot weed free, although her crop is not as healthy as the others. Lord, look down on Domatter and her faithfulness with so little.

Mavis, a blind lady who had to beg in order to make a living, has planted an excellent crop, boasting straight lines and mulch! With characteristic humour, she jokes that no one else has lines anywhere near as straight as hers. Mavis accomplished these beautifully straight lines all on her own, by following the same methods taught to everyone else. The difference is that she had to feel her way …

This little community of people have proved that ‘disability’ does not mean ‘inability’ and are a growing, shining light of inspiration and hope in the area. Together, they are farming land that had previously been written off for cropping, and was used only for cattle. The visual results are catching the attention of passers-by as well as others in the area. The message: if physically challenged people can get such excellent results on supposedly unfertile land – anyone can farm God’s way! Even those in authority are taking notice, the District Administrator and the Ministry of Agriculture have both written reports on Tazvita, which have been sent to the Provincial Government Office.

“Deny your weaknesses, and you will never realize God’s strength in you.” Joni Eareckson Tada