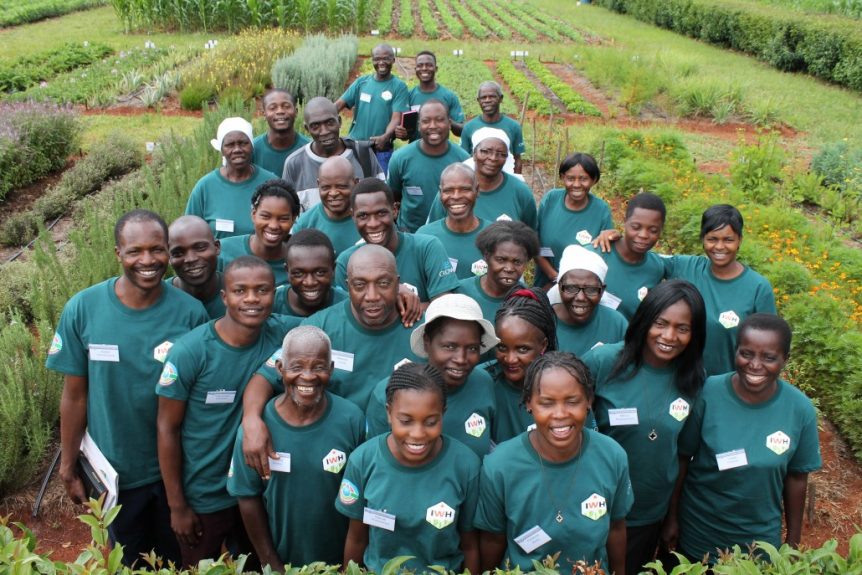 Praise rang out from the little upper room at Clouds End as the New Hope Villagers from Hwedza stood together with the team in Friday’s devotions. It was the deep rhythmic praise of Africa, the kind that moves your heart and lifts your spirit. One could imagine the Father smiling as He watched His children singing to Him, with hands, hearts and voices upraised.

The Hwedza folk have completed their two weeks of training, and will now hopefully impact the rest of the Village, and surrounding communities, with their newfound knowledge. There is nothing more powerful than healthy, green growth to arouse the curiosity of neighbours and passers-by. In many places across the country, our rich and fertile African soil has yielded flourishing harvests in response to applying God’s simple yet profound farming methods. But only for those brave enough to break with tradition. Included in this group, were a few older people, well steeped in the ways of traditional farming. Once the initial scepticism lifted, they began to listen intently, devouring the teaching and complaining that the days ended too quickly! Now, after many years of either poor or mediocre harvests, they are keen to take what they have learned and apply it. Change! ‘New’ knowledge, gently and respectfully offered. How exciting to watch aged eyes light up with the revelation that God’s ancient methods in fact date back to the beginning of time – long before man’s traditional ways. And to watch heads, greyed and snowy with wisdom, nodding appreciatively as everything began to make sense. Elders are greatly respected on our continent and their approval means a lot in village life. It seems God often selects one or two to learn.

As usual, change not only took place in the perception of farming. Many of the group, although already Christians, were having their hearts tilled as a whole new perspective on finance and family opened up. Added to this, the Alpha Course was woven into each day. Some spoke out about change that was taking place, others remained silent as God dealt privately on the inside. Concillia (our trainer) walked through the Crown Money Map with them, which teaches godly principles in handling finance with honesty and integrity. A man became convicted of having kept his wife in the dark about his earnings for many years, and wanted to come clean with her as soon as he returned home. Another confessed to having squandered money that belonged to someone else, and now sincerely wanted to pay it back.

In another teaching on sexual purity, a young woman listened intently, hanging on every word. Although she remained silent, her open face and soulfully expressive eyes showed that God was penetrating her heart. By the end of the lecture, it was clear that she had been deeply touched. One man described being so angry at someone for stealing his cow that he wanted to kill the thief! He now recognized the poison of hatred, hidden under layers of justification. Someone else spoke on tithing, saying that he thought he had been doing a ‘good’ thing, but realised he had given with a religious spirit. God was placing truths into their hearts, like hidden jewels that will come to shine brighter as the murkiness of self continues to be washed.

In contrast to the Mandebvu and Tazvita groups, where change was so excitingly barefaced, this group has been harder to gauge. God has been working quietly, below the surface. Many have been churched for years, religiously following the rules, but not Jesus. They loved Him, or at least thought they did, in their own way. But here, they were hearing and learning things that caused religion to melt – into relationship. This Jesus, Who they thought they knew, was speaking to their hearts… and some were hearing for the first time. Really hearing.

We cannot know what God has been doing within, only time will reveal the fruit. This last weekend as they returned home, some left empowered with knowledge, but perhaps that was all. For others, there had been revival, a fanning of dying embers back into flame. Some had arrived with untouched, unbelieving hearts, which were placed into the hands of Jesus for the first time, and made new. But as each were brought before Him, He took them lovingly, and exchanged their wretchedness for His righteousness. The fruit will come…