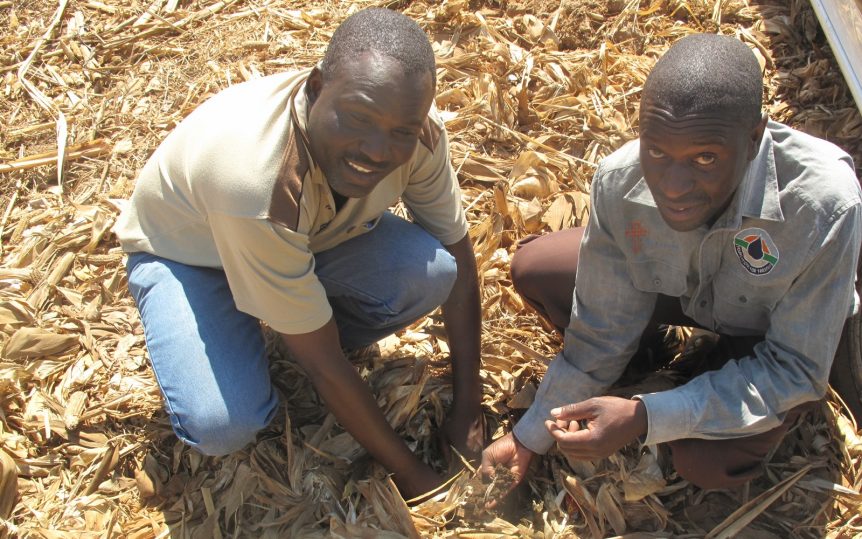 Harvest is such a joyful time– especially when the harvest is good!

Three years ago, I visited the United States and brought back to Zimbabwe five precious cobs of open-pollinated maize seed from an Amish farming family in Pennsylvania. This seed had been in the family for generations and was a truly remarkable gift.

Our first open-pollinated seed from the original Amish seed

With it, using very simple, God-inspired Foundations for Farming methods that follow the principles of the Amish farmers, who also practice conservation agriculture and do not plough, we have been growing a small demonstration plot at the Ameva Bible School in Chegutu each year.  Every summer we plant the seed, nurture it and then reap it – and we keep the best cobs to plant again.

During recent years, we have had very dry seasons where all of the maize around the demonstration plot has died and our maize crop has been the only one that could be harvested in the entire area.  The reason for our success is that we have been practicing Foundations for Farming conservation agriculture principles faithfully – and they work!

This year we had a very wet season.  Farmers know that growing maize on sandveld soils in a wet season is difficult because the fertiliser leaches out, the maize turns yellow and growth is stunted. Most of the subsistence farmers in the small-scale sector do not fertilise properly and so their yields are abysmal.

We have been growing our maize with zero basal fertiliser – so I was worried about what would happen this season. When we set up our Ameva demonstration plot, it was the first time I had planted maize in sandveld soil.

Compost-making out of dry grass, leaves and other organic matter

During the winter, instead of buying chemical fertiliser, we have been making compost out of dry grass and other organic matter from the surrounding bush.  This is applied in each carefully placed planting hole before planting.  We also have a rotation with cowpeas which fix nitrogen in the soil for the next year’s maize crop.  Then of course there is the mulch that is left on the surface each year to protect the soil from erosion and conserve the moisture.  Over the last few years it has broken down and improved the humus content and fertility of our sandveld plot.

Harvest time is always exciting!  We had some theft – sadly a common problem in our nation.  As the day progressed though, more and more full bags of grain came off the land and the theft didn’t seem to have dented the harvest too much.  When we came to do the weighing, we realised we had harvested at a yield of 6.5 tons a hectare!

So let’s get this clear:  here is a farming business model that uses no costly oxen, no tractors from overseas, no diesel from the Gulf, no ploughs from the factory, no irrigation schemes from Israel, no hybrid seed from a commercial seed company, no compound fertiliser from a fertiliser factory and no chemicals from a chemical manufacturer.

The only thing we did buy was a little ammonium nitrate (a high-nitrogen fertiliser) which we applied at 10 grams per plant station before tasseling; and of course the bags for the harvested maize.  The only implement we bought three years ago was a badza (hoe).

Foundations for Farming has taught us that if farming costs are to be reduced to almost zero for the poor, and revenues are to still remain substantial, we need to:

1. Use open-pollinated seed that can be kept from one year to the next;

2. Use homemade compost to fertilise the crop;

3. Use mulch to retain moisture;

4. Use the no-till conservation agriculture method, i.e. we do not plough but just make carefully measured planting holes with a badza.

These four points equal efficiency.  The only real cost is the labour – much of which would be needed in more conventional farming anyway.  On small plots, the labour is all provided by the family.  Efficiency for the poor is where costs are brought to almost zero.

Apart from efficiency, Foundations for Farming teaches two other principles absolutely central to growing things well: doing all farming operations excellently and then doing them all on time.  In countries with high unemployment and largely poor populations, farming with Foundation for Farming principles make absolute sense because the costs are almost zero, and excellence and timing make for good revenues. This is especially important in Zimbabwe where there is over 90 percent unemployment, a large part of the population is seriously poor and no actual cash is available from the banks to buy anything anyway!

There is also a third principle.  It is do everything with joy.  When you plant, planning ahead for the joy of harvest, it’s amazing what strength that joy brings to do all the farming operations wholeheartedly!  Out of the joy of harvest we encourage people to then give open-pollinated seed to their neighbours to help them come out of poverty too.

I remember these principles as “EET” – a badly spelt version of what the wealthy do three times a day to stay alive: eat!  If we don’t “EET” we die.  It’s “E” for efficiency; “E” for excellence; and “T” for timing.  Zimbabwe doesn’t “EET”, so it’s dying.  The whole of Africa needs to learn to “EET with joy!”

Africa is not efficient.  In fact, there is massive wastage all the time and across the continent.    Why don’t farmers make compost?  Why don’t they use open-pollinated seed?  Why do they burn their mulch?  Why do they use massive amounts of energy in ploughing the soil?

We don’t do things excellently.  Subsistence maize crops everywhere are generally a shambles of wandering, drunken lines and haphazard spacing.  Weeds are allowed to grow up.  Rotations are not followed.  Pests and diseases are not dealt with.  God judges farming methods that are not excellent very harshly.  Farming is the closest profession to the laws of nature that God put in place from the beginning.

We don’t do farming operations on time.  The timing of planting is often a month late – or even two months late in Zimbabwe.  Normally it’s because poor farmers don’t have money. They are waiting for hand-outs from the international aid community which can be delayed during the distribution process. The dependency syndrome makes people poorer.  Late crops will never come to very much:  the sunlight hours are not long enough during the peak time of photosynthesis and there is not enough rain during the late grain-filling stage to ever produce a decent crop.

With “EET” Foundations for Farming methods, the poor can stand on their own two feet and be catapulted out of poverty.  We have seen this.  We don’t need to be late if all the inputs are from the farm or plot and don’t need to be bought from a shop or given out by an aid organisation.  On our demonstration plot we now have a full six months to store the seed, spread the mulch, make the compost and dig the planting holes in precise positions before the next planting season.

By early November we will have been ready to plant well in advance – and we won’t have bought anything or been donated anything!

At the Grain Marketing Board (GMB) price of US$390 per ton, 6.5 tons a hectare is US$2,535 per hectare.  That’s a fortune in Zimbabwe.  And it’s almost all clear profit.  That yield – which we achieved with no cost – is over 10 times the current national average yield.

Africa doesn’t need the world to feed us!

At the beginning of the rainy season last year, I spent time going around the rural areas speaking to poor rural people.  They were desperate to plant but had no seed.  Of all the inputs that a farmer needs, seed overshadows everything else by an immeasurable factor.  As a boy I remember reading Robinson Crusoe and being so happy that when Crusoe was shipwrecked on a deserted island, some barley seed he had shaken out of a bag came up and grew.  I knew that with the seed he would be able to survive on the island. The commodity of most critical importance to survive and live is seed.

Last year, through the kindness of good friends, we leased 20 ha of ground, developed it, and have managed to grow a very successful open-pollinated maize seed crop.  Together with Foundations for Farming, we will be giving out that seed to the poorest of the poor so that they can nurture their seed like Robinson Crusoe, saving seed for next year and the year after that.  This means that they will not be reliant on donors or the big seed companies that grow hybrid varieties, requiring farmers to go back year after year to buy their seed.

We are also encouraging those farmers to give some of their seed to their neighbours as well.  It’s a principle that’s very important.  Just as giving to the crop is essential to yield a good harvest, so giving to your neighbours yields a strong community.

The sense of satisfaction in planting a seed that has been kept from a previous year, and working to allow a crop reach its potential, produces a great sense of joy.  That’s the fourth element to “EET”:  it brings joy.  When we prepare to plant, having confidence in the joy of harvest because we are doing operations efficiently – and excellently – and on time, it gives us strength to do things even better.  So we must “EET with joy”. That’s the secret to bringing rural communities out of poverty.  It’s revolutionary, but like most revolutionary plans, it’s also very simple.

If business schools and churches – and those who care in Africa – taught “EET with joy”; and businessmen and farmers practiced “EET with joy” – and gave seed to their neighbours – our harvests each year would feed the world!

What even happier, productive harvest that would be!