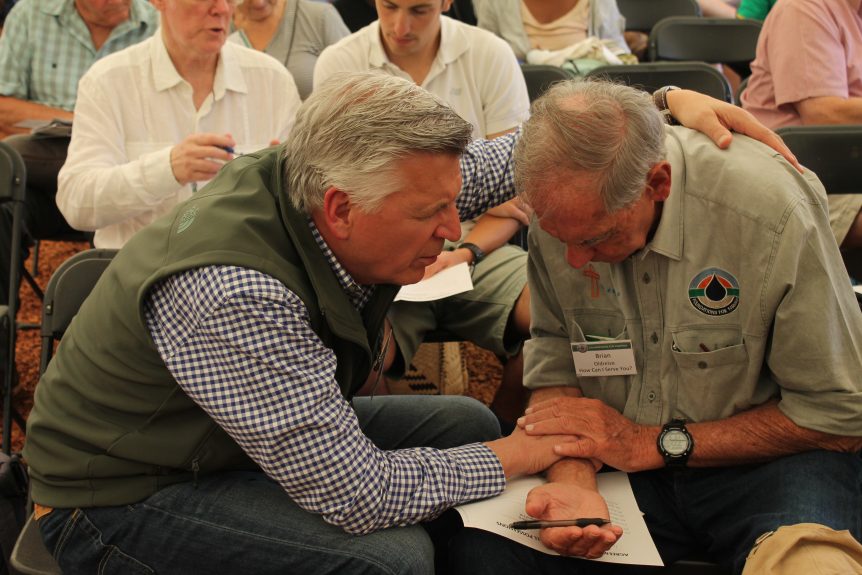 Day Two began again with much jubilation and worship rising up to the heavens!

The talks opened with the ‘Young and Old’ as 12 year old Tinashe shared his success in using FfF methods.  Tinashe – an orphan who was taken in by his grandmother – is now taking care of her as he faithfully stewards their little piece of land.  Asked what advice he has to give, he responded that “the money is in the soil” to a roar of applause.  Standing next to Tinashe and his grandmother was 73 year old Maggi Chirodza, or ‘Gogo’ (grandmother) as she is fondly known by all, including our many international FfF visitors.  Gogo is an incredible example and advocate of God’s farming methods.  Standing next to 12 year old Tinashe, the two gave a powerful visual message … ANYONE can do this!

The Crown Ministries team shared on the ‘Money Map’ – incredibly simple yet effective and life-changing budgeting principles which can be applied by anyone whether educated, uneducated, wealthy, poor, big or small.

Pastor Malvin spoke on how FfF has transformed his remote little community of Madzima.  He was followed by our GRT, Nyengi, with  two ladies from the IWH Epworth group which she shepherds.
Inspired by how Brian’s knowledge sharing has led to theirs and so many other lives being changed,
these ladies have applied the methods and are also teaching into their community.

Ex Minnesota farmer, Steve Bower, is with the Indigenous Peoples’ Technology Education Centre (ITEC) in the States.  They develop technology and training materials for those in close contact with unreached people groups.  Steve ended with a touching story about his Dad.  Still driving a tractor at 95, he would say when harvesting the last cob “This is the one we’ve been looking for all fall.”  And then, “Likewise, let’s keep working until we find the last person to hear the gospel.”  What a beautiful analogy!

Dianna Federinko is part of the FfF family and teaches from an orphanage in Lechinga, Mozambique. An agricultural scientist living in Mexico, Dianna was led by God to Australia and twenty years later, to Africa and FfF, then finally into Lechinga – which she now calls home.  She brought some co-workers and one of the young girls from the orphanage she is involved with.

Our GRT, Conci, introduced the Goshen group, who came out of our very first IWH trainees from Mandebvu.  Four members were chosen by Hands of Hope, and given some land on Goshen Farm to be a light to the community.  Despite untold challenges, they have persevered as true Champions and are not just shining, but absolutely radiating Jesus through incredible example.

The evening at the Base Church rocked with incredible praise and worship followed by Chuck Bentley’s introduction of Patrick Kuwana from Crossover Transformation.  Patrick gave an anointed and powerful message on how change comes about when the church surrenders in obedience to God, clothing herself in Christ.