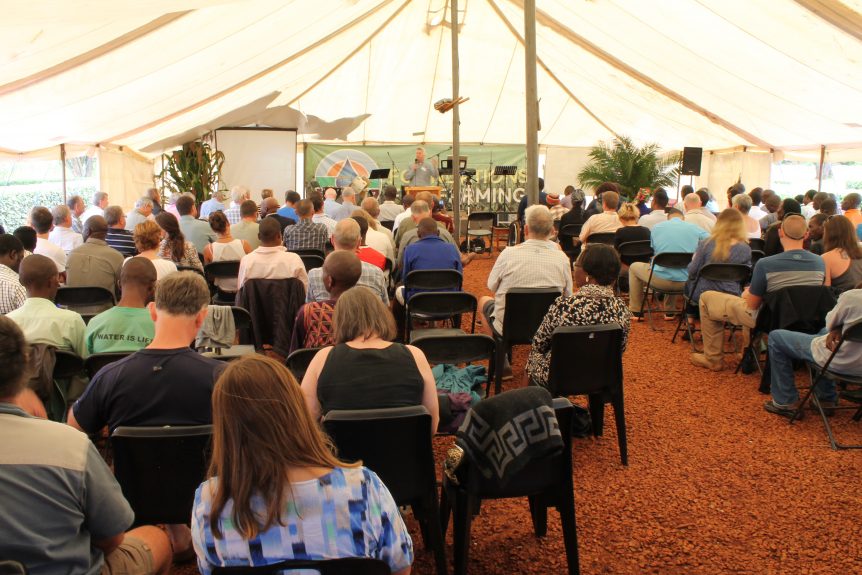 The final day of Champs is always bitter-sweet as a three day feast comes to and end, but with hearts filled and changed. As always, many nations were represented – Australia, UK, India, USA, Malawi, Mozambique, Zambia, Germany, Canada, South Africa, New Zealand, and of course, Zimbabwe.

After roof raising praise and hauntingly beautiful worship, the IWH Kanyemba group were introduced by Mashoko. These truly are the poorest of Zimbabwe’s poor, from a remote area in the north. Every month Mashoko braves crocodiles and hippos when crossing the river to visit them. The Doma people were part of the group, a despised tribe. One man told us that they are used to being treated like animals, but coming to Clouds End they were treated as valuable human beings … for the very first time. What a privilege and an honour to serve Jesus in this way – truly humbling.

Patrick Kuwana launched into a riveting message on how choices made in the spirit are played out in the natural. Talking of Africa he said when true spiritual transformation takes place, it will become evidenced in moral and cultural transformation, leading onto to the economic and social. Such a message of hope and encouragement, as well as and individual challenge to be a part of the change God wants to bring.

Two representatives from the Lemba tribe were introduced by Thompson our GRT, overseeing this IWH group. The Lemba heritage is rooted in Israel, and they hold their Jewish ancestry very dear, closely following the old traditions.

Mark Devaraj was with us all the way from Pagadupattu, in Salem, India where he began a FfF station in 2012 reaching out to poor farmers. He and his family are now in Mumbai, where they have been invited to develop another station.

Mike Manota introduced some of the IWH group from the sprawling community of Hatcliff, next door to Clouds End. One man, Thomas, shared how since learning FfF he is able to feed and educate his children. Discovering Jesus on the course, Thomas now jokes “Once I used to steal maize, but now I have so much, and others are stealing from me!”

The most recent of IWH trainings was with the Mazwi people from Bulawayo, who proved to be yet another God-chosen group. A couple of them came to share testimonies, one of which was a mother with a heart rendering story of coming to know Jesus on the course, and reconciling with her daughter. God brings many harvests from these trainings … not only maize.

Chuck Bentley gave a powerful and encouraging message on ‘Dependency’. Good dependency – on Jesus! Based on the story of Elijah and the widow with her last dregs of oil, Chuck called us to be faithful with whatever we have, working hard as unto God – and He will multiply. He closed with the question: “What do YOU have?”

Brian gave the final word, taken from Isaiah 58 and Craig closed the conference with thanks to the many who contributed and attended.

Another Champs has passed, and once more we are left humbled at the evidence of an incredible God. Praise You Father!